We are all connected.

I’ve been donating money and my free time to different companies and organizations for years now (from animal shelters to companies that provide fresh drinking water in Africa and other places). And now is the time that I take this to another level – with your help.

You came across my work for a reason – you’re either injured or your loved one got injured. Either way, you’re looking for a healing solution.

Your investment in your healing also helps someone else.

I’m dedicating a percentage of my business income to organizations and companies around the world that are creating a better future.

By helping yourself on this healing journey you’re helping others around the world as well.

Where donations went this month…

This month we donated $130 to Bonaire Wild Bird Rehab and IMADR.

*Bonaire Wild Bird Rehab is a non-profit organization helping wild birds in need. A lot of their work goes towards flamingoes, but the rehab center has seen all manner of residents–ducklings, frigate birds, boobies, owls, parrots, herons, and caracaras to name just a few.

*SBSK – Special Books by Special Kids – is a non-profit organization that I discovered recently and fell in love with immediately. Chris and Alyssa’s mission is to create a more inclusive world so Chris interviews people with disabilities and oh, what a joy it is to (binge-)watch those conversations.

The organization seeks to normalize the diversity of the human condition under the pillars of honesty, respect, mindfulness, positivity and collaboration. This multi-media movement supports the acceptance and inclusion of all members of the neurodiverse community regardless of diagnosis, age, race, religion, income, sexual orientation, gender or gender expression.

This month we donated $70 to Playa Animal Rescue.

*Playa Animal Rescue is a non-profit, no-kill animal shelter located in Playa del Carmen, Mexico. They are dedicated to rescuing and rehabilitating injured and abandoned dogs, and to finding permanent, loving homes for each of them. They are also dedicated to promoting responsible pet ownership with community outreach and education, as well as promoting spaying and neutering of pets.

At the beginning of the year, my husband and I rescued a completely starved and mangy pup and named him Bello. He’s been spending his time in this shelter, healing and getting better and better, and we’ve been visiting him regularly to keep him company (and bring him snacks, of course :)). We cannot wait for him to find his fur-ever home. You can see before and after photos of Bello below… 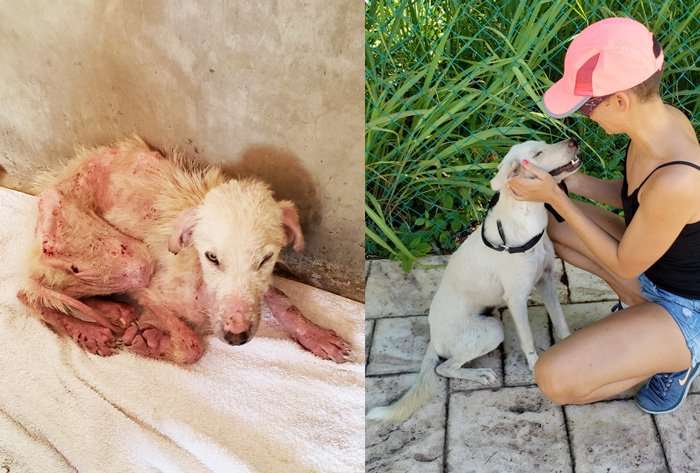 Bello featured on The Dodo

This month we donated $150 to Centro Ecológico and Friends of the Earth International.

*Centro Ecológico is is a non-governmental organization that focuses on sustainability-related issues and improving ecosystem management in and around Akumal. Yes, it’s turtle nesting season here in Riviera Maya, and six of the seven species of sea turtles are listed as threatened or endangered. Two of these species nest on the beaches of Akumal (Akumal means “Place of the Turtle” in Mayan). This month we symbolically adopted a turtle family.

*Friends of the Earth International is the world’s largest grassroots environmental network. Their groups campaign in 73 countries on urgent environmental and social issues such as climate change, destruction of the world’s forest, unethical business practices, and genetically modified foods.

This month we donated $155 to The Dean Schneider Foundation and Chilis on Wheels.

*The Dean Schneider Foundation initiates, supports and operates worldwide projects for the protection of animals, in particular wild animals. These include, for example, projects aimed at the protection, care and/or reintroduction of animals into the wild. It also pursues projects that highlight the importance of nature and animals while emphasizing the responsibility of treating both respectfully.

*Chilis on Wheels makes veganism accessible to communities in need through services such as meal shares, food demos, clothing drives, and mentorship. They provide networks of support and build strong empowered communities within the areas that they serve.

This month we donated $550 to Hope For Justice, El Pozo De Vida, and Limbs For Life.

*Hope For Justice is a nonprofit organization that strives to end modern slavery by preventing exploitation, rescuing victims, restoring lives and reforming society. They work in the USA, UK, Norway, Cambodia, Zimbabwe, Uganda, Ethiopia, and Vietnam.

*Limbs for Life Foundation is a global nonprofit organization dedicated to providing fully-functional prosthetic care for individuals who cannot otherwise afford it and raising awareness of the challenges facing amputees.

This month we donated $170 to e-NABLE and local communities.

*e-NABLE is is a group of Makers, Engineers, Medical Professionals, Tinkerers, Teachers, Students, Artists, Philanthropists, Parents and “Ideas people” who have come together from across the globe to collaborate, innovate and re-design the 3d Printable open source design of a mechanical hand device that was released as the original “Robohand” open source file in 2012. E-nable does not sell these devices – but instead – encourages parents and individuals to create them on their own, guides them in the building process and prints parts for those that need them. This month we donated 4 ‘GIVE-A-HAND – e-NABLE hand kits’.

*local communities: A lot of people lost their jobs in the last few weeks due to COVID crisis. The backbone of Playa Del Carmen where we live are people that work in tourism (and tourism-related construction). Many of them lost their jobs and have difficulties bringing food to the table for their families. A part of this month’s Giving Back went to providing for those in need. Here’s a snippet >

This month we donated $120 to Ocean Conservancy and charity:water.

*Ocean Conservancy was founded in 1972, with goals to promote healthy and diverse ocean ecosystems, and to oppose practices that threaten oceanic and human life. This organization is working hard to see that the ocean’s most extraordinary places are preserved for future generations to use and enjoy.

*charity:water is a non-profit organization bringing clean and safe drinking water to people in developing countries. 100% of public donations made at their website directly fund clean water projects. They also prove every completed project using photos and GPS coordinates in Google Maps.

This month we donated $80 to One Tree Planted.

*One Tree Planted is a nonprofit organization on a mission to make it simple for anyone to help the environment by planting trees! They fund reforestation projects in North America, South America, Africa, and Asia by working with local communities and only native tree species that are grown in nearby nurseries.

One dollar plants one tree. I’m happy to say that 80 trees will be planted in Australia (that is in desperate need of that right now).

This month we donated $74 to Playa Animal Rescue.

*Playa Animal Rescue is a non-profit, no-kill animal shelter located in Playa del Carmen, Mexico. They are dedicated to rescuing and rehabilitating injured and abandoned dogs, and to finding permanent, loving homes for each of them. They are also dedicated to promoting responsible pet ownership with community outreach and education, as well as promoting spaying and neutering of pets.

This month we donated $40 to Coco’s Animal Welfare.

*Coco’s Animal Welfare aims to reduce the population of cats and dogs in Playa del Carmen and the Riviera Maya through their permanent sterilization clinic and sterilization campaigns in different areas of the region. They are committed to educating the community about responsible treatment of their pets and changing negative attitudes and behavior towards dogs and cats in the street. To date they have sterilized more than 28,000 animals in the Riviera Maya.

This month we donated $270 to Team UnLimbited and 50legs.

*Team UnLimbited is a charity and was founded by Drew Murray and Stephen Davies who are developing and gifting prosthetics with personalized designs to children (and adults) around the world. Pick your own color and pattern and let the founders take care of the rest!

*50legs is a charity whose purpose is to provide amputees with the necessary prosthetics that they could not otherwise afford, to help them live a happier and healthier life. 50legs was founded by Steve Chamberland.

This month we donated $75 to NutritionFacts.org.

*NutritionFacts.org is a strictly non-commercial, science-based public service provided by Dr. Michael Greger, providing free updates on the latest in nutrition research via bite-sized videos. There are more than a thousand videos on nearly every aspect of healthy eating, with new videos and articles uploaded every day.

Dr. Greger is a physician, New York Times bestselling author, and internationally recognized speaker on nutrition, food safety, and public health issues. A founding member and Fellow of the American College of Lifestyle Medicine, Dr. Greger is licensed as a general practitioner specializing in clinical nutrition. He is a graduate of the Cornell University School of Agriculture and Tufts University School of Medicine. In 2017, Dr. Greger was honored with the ACLM Lifestyle Medicine Trailblazer Award and became a diplomat of the American Board of Lifestyle Medicine. He was also one of the speakers of The Mindful Injury Recovery World Summit 2019 (more info here).

This month we donated $130 to Earth Alliance and KKIS.

*Earth Alliance. The destruction of the Amazon rainforest is rapidly releasing carbon dioxide into the atmosphere, destroying an ecosystem that absorbs millions of tons of carbon emissions every year and is one of the planet’s best defenses against the climate crisis.

In addition, indigenous peoples’ land covers about 110 million hectares of the Brazilian Amazon, making the region critical not just for biodiversity conservation and climate change mitigation, but also for the cultural survival, self-determination, and wellbeing of the Amazon’s indigenous peoples.

*KKIS (Keep Kids in School) is an organization that helps children and families in one of the top tourist destinations in Mexico where local people make less than $10 per day. Even though 12 years of education in Mexico is compulsory the average number of years is only 9 (the problem is primarily economic – families cannot afford the costs of a public education; they need their children to work). KISS provides scholarships, school supplies, help children learn English and so on.

Almost there! What is your best email to deliver this audio training?

Awesome! My website elves will deliver your ebook in no time! (Few minutes, tops.)

Almost there! What is the best email to deliver your access details?

Awesome! My website elves will deliver your link in no time! (Few minutes, tops.)

Almost there! What is the best email to deliver your access details?

Awesome! My website elves will deliver your ebook in no time! (Few minutes, tops.)

Almost there! Where should we deliver your playbook?

Awesome! The playbook is on its way to you :)

Almost there! What email should we use to create your account?

Awesome! The login details are on their way to you!